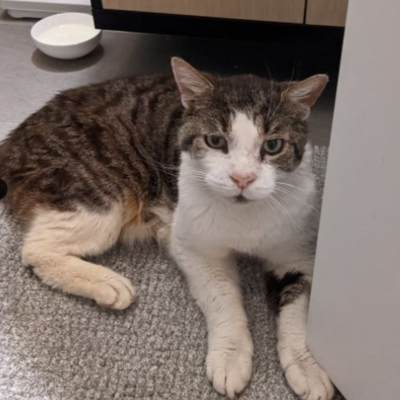 Zac is an old boy who has many stories to tell…. if only we knew. Lost from his original home at 4 years of age, 8 years later his microchip alerted rescuers he had a home somewhere! Alas, too many years have passed and the owners, although amazed were not in a position to have him back.
It may have been rough out there on the streets for Zac as he’s picked up FIV which means he needs to be an inside cat or at least with access to a fully enclosed space outside. FIV is not communicable to any other life form except non-immunised cats.
Zac likes to ride solo so he is looking for a home with no other pets or any small kids.
Zac is gentle giant who needs love in his old age. Are you that person?

Medical notes
Zac has FIV which is a condition which can be easily managed. He just needs to be taken straight to a vet if any problems arise as being FIV+ his immune system is slightly compromised.
He also has a slight heart murmur which does not bother him. He has some arthritis too due to his age, this is managed by liquid medicine squirted on his food. Despite all of the above he is a happy boy who is not too bothered by much!
He must be kept strictly indoors or given access to a secure enclosure.