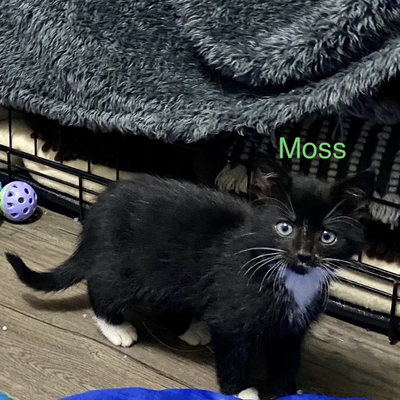 Moss, the tiniest member of the Veggie Patch litter (and one of only two girls), was the very first kitten to lie down on our laps and purr like a lawnmower! She is an absolute sweetheart with her dark face, snow-white whiskers and beautiful green eyes. Moss is now on the lookout for her very own forever family. Here is a bit about our resident cuddle bug!
Likes:
Getting amongst the action
Sashaying around and conveniently brushing against her people and siblings for affection
Starting fights with house plants and other inanimate objects
Dislikes:
Being shooed away from said house plants
Surprises (like a pat she doesn’t see coming, or being woken up from a nap)
When the woodfire she basks in front of goes out
Moss stole our hearts from day one. She was part of The Three Amigos along with her brothers Nettle and Beets; this little trio were out and about well before their siblings, sussing out the way life worked indoors and with humans. Moss has always been tiny, but does she ever hold her own!
Moss is a superior napper who loves to sleep in the warmest place she can find, preferably in a pretzel knot with her siblings. When she’s awake, though – she’s on! Moss loves toys of all description and is often spotted spinning clothes pegs around in circles. Like her brothers and sisters, she loves free time outside of the enclosure when she can explore the dogs’ beanbags and knock things off the bedside tables. When we manage to get her back inside her enclosure, she’s happy for a cuddle and a treat before sashaying off to do her own thing.
Important: Moss, as one of the Veggie Patch litter, spent her first six weeks living in the backyard vegetable garden of a very kind stranger, and learning all about life from her ‘tough nut’ mum. Mum is a well-known ‘neighbourhood’ cat of no fixed address. As such, Moss may, at times, be a little wary about new people, loud noises or changes in her environment.