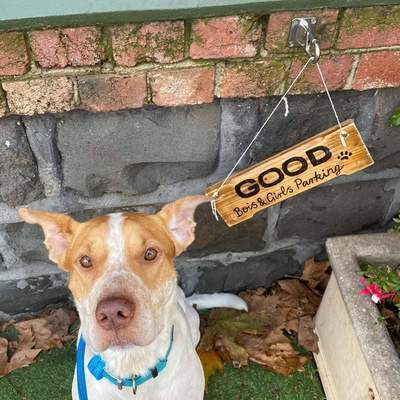 Dusty has big ears and an even bigger heart who charms everyone he meets. In so many ways he is nearly The Perfect Dog, and his forever family will need to be dedicated to ongoing socialisation to help him get there.

Dusty absolutely thrives when he’s got a routine and makes for a reliable (and adorable) alarm clock. After a morning walk, he’s content to snooze the day away, especially if he can find a sun beam.

Dusty loves to be with his people but doesn’t demonstrate any separation anxiety and has been fine when his foster carer’s returned to work full-time. He’s had full reign of his foster home while they’re at work, and he sleeps the day away – your shoes are safe (although, from experience, muffins on the counter are not). When you’re home, however, you’ll have a furry shadow who wants nothing more than to be curled on the couch beside you.

He loves to play tug of war or fetch and is utterly obsessed with his Wubba. It would be a dream of his to have a backyard to play fetch in, especially as he’s not ready for the dog park. Dusty’s extremely clever and, between his need to please his people and his food motivation, he is a fast learner who can pick up new tricks within a matter of minutes. He’s got his basics down pat, his recall is excellent, and he can shake, sit pretty (beg), roll over, “drop”, and “leave it” like a pro.

Dusty is very wary of new people coming into his home, particularly men, and he’s nipped in the past. He is also reactive to unfamiliar dogs. He’s been very successful with slow, controlled introductions to both people and dogs. Using treats or his Wubba while on walks has also helped Dusty come a long way to reducing his reactivity.

Dusty is such a sweet and loving boy who forms a close bond with his people. You can get lost in his big soulful eyes. He deserve a forever family who will give him just as much love in return and help him become the best he can be.